Friday 5th June saw a (fool?) hardy group of 16 descend upon Llanberis to ascend Snowdon the following day. Unfortunately, traffic chaos turned the usual 5-hour journey into 8 and although one party arrived after midnight, we were all positive and raring to go.

Next day, after a hearty breakfast, we set out on a gentle climb through sunny woodland to pick up the main trail, with Jim Cook setting a cracking pace. We started with a good walking temperature, a light breeze and the odd cloud but sadly didn’t last long. The final climb, completed at -1°C, 20m visibility and 60 mph winds was testing to say the least. Scarves, gloves and hats became the order of the day towards the summit as temperatures plummeted and winds exceeded 60mph – a slight impression of the wind can be gained by the billowing of Nick’s walking trousers.

Whilst the Llanberis route is one of the longer paths, it does not have the steep scrambles found on the Pyg Track or the stunning Crib Gogh ridge and for that reason, it is the most popular tourist route to ascend Snowdown. Good quality kit was essential. Snowdon, like all good peaks can have all 4 seasons in the same day and can be a very unforgiving place. It does not pay to take liberties with nature.

With that weather, we had no idea why every man and his dog had chosen that day to climb, so the final push was done in a slow-shuffle passing a similar queue trying to get down and recover the feeling in their fingers.

Our descent proved faster, with warmer temperatures at the lower altitudes proving an excellent incentive.

Arriving at the bottom we found comfort in an excellent pub-café where through choice, we mostly supped tea and feasted on Bara Brith. 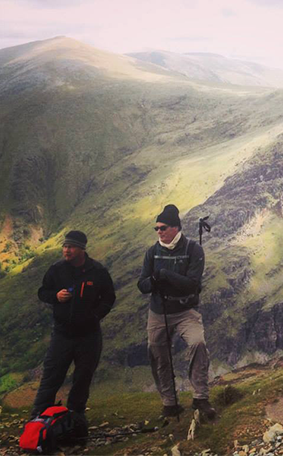 Getting very windy up here 60mph + 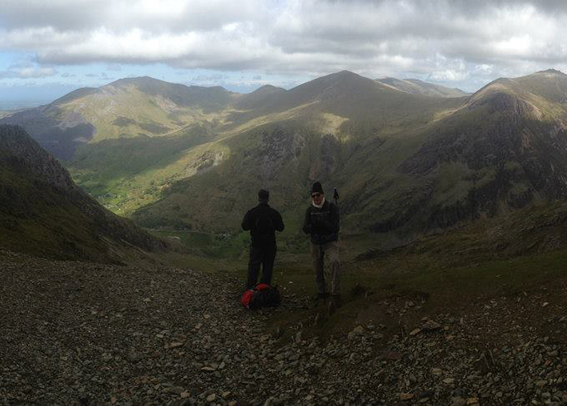 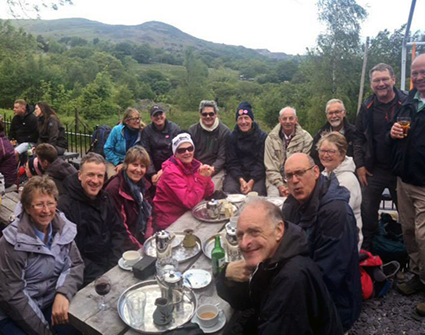 That evening around an open square table, we enjoyed an excellent dinner, while regaling each other with our personal triumphs on the mountain.

Assisted by excellent wines, thanks to Nick Parsons, we were able to relax physically and mentally while deciding who should participate in the next adventure, a sky dive.

Story adapted from www.surreypillars.com. 22/06/15 and acknowledged with thanks.
Pictures by Ross Worthington, Raw Adventures