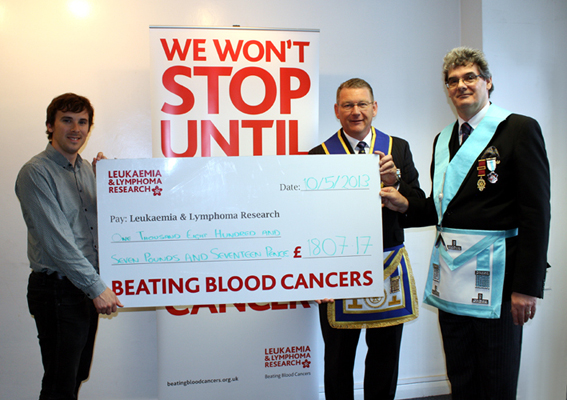 W.Bro Nick Tyrrell was installed as Worshipful Master of Priory Gate Lodge in May 2012 and with his wife Connie, hosted their Ladies Festival on March 16th 2013 at the Runnymede Hotel, Egham.

Their choice of charity, Leukaemia & Lymphoma Research was prompted by the knowledge that W.Bro. Brian Penfold, a friend of over 25 years and Nick’s proposer into Freemasonry, had been recently diagnosed with a rare blood cancer.

Thanks to the tremendous generosity of the Brethren and all their guests, the evening raised over £1,800 for Leukaemia & Lymphoma Research with a further donation from a Lodge member who was unable to attend, bringing the total raised to £1,900.

W.Bro Nick and W.Bro Brian presented the cheque on behalf of the Lodge to Regional Manager, Ben Sykes on 10th May which was Nick’s last official duty as WM before installing his successor, W.Bro Ron Pearsall.  W.Bro Ron served the Lodge as Master from May 2013-14. Sadly he died from cancer in July 2018.

Sadly, Brian lost his Mum to the disease after a long struggle when she was just 54, but fortunately his daughter is fit and well and continues in good health.

Against this background, Brian was therefore devastated to be diagnosed with Hyper Eosinophilic Syndrome/Chronic Eosinophilic Leukaemia (HES/CEL) in May 2012.

His health had begun to deteriorate in 2010 and after a protracted period of chasing an elusive diagnosis, an abnormal routine blood test before a neck operation showed a very high level of eosinophils, leading eventually to a diagnosis of HES/CEL in May 2012.

HES/CEL  is a disease in which too many eosinophils (a type of white blood cell) are found in the bone marrow, blood, and other tissues. It is an incredibly rare disease, but is highly manageable with the use of Imatinib (Glivec), which suppresses the oncogenic effects of the FIP1L1-PDGFRA+ gene mutation.

There is (currently) no cure for HES/CEL and Brian will need to take medication for the rest of his life.  As of September 2018 he remains in remission and is fit and well.